No, this is not a new Nintendo Wii game. This is actually research project at the University of Southern Denmark. The project is called Casmobot (Computer Assisted Slope Mowing Robot). 'The Casmobot project is about making grass cutting more efficient,' said Kjeld Jensen, a robotics researcher at the University of Southern Denmark who developed the system. It uses a standard Wiimote that communicates via Bluetooth to a computer and robotics module built into the mower. Actions of the mower are matched to tilt actions of the remote. For example, if you tilt the remote down the mower moves forwards; tilt it up, and it moves backwards, and so on. The Wiimote can be used to control the mower manually or in computer-assisted mode, where the mower uses autonomous navgiation based on RTK GPS positioning to cut larger areas." 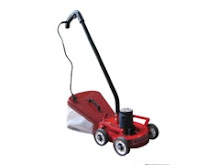